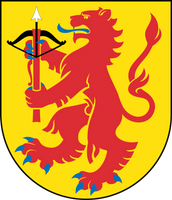 THE JONSON SISTERS IN CHICAGO 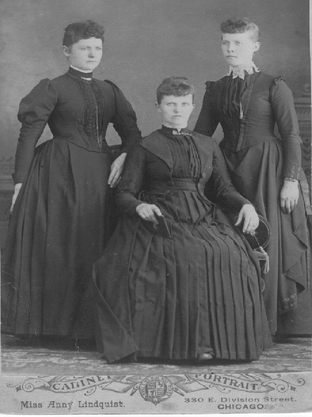 From left: Hilma, Christina and Anna.

This is about three sisters - Christina, Anna and Hilma - who emigrated from Sweden to America in the 19th century leaving Sweden for good. They married Swedish men and became Mrs Christina Larson, Anna Dolson and Hilma Hedlund respectively. They had a total of 16 children, and exactly how many offspring that may exist today is still unknown, but it runs to some 300. The sisters had contact by letters to their relatives in Sweden. The next generations of relatives in Sweden and America respectively had sporadic contact, but since they never met it was hard for them to have anything to talk about. So the contact died gradually as new generations were born.

In 2005 I had contact with my "new" relatives in Ekenässjön in south Sweden, Carin Eriksson and Elisabeth Jonsson, which I found through my genealogy. They showed me some letters and pictures from relatives who emigrated to America in 1867 and 1887 respectively. It took me a long time to find out how to make a deeper genealogical research in the U.S. By using some databases and contacting different institutions in the U.S. it became possible to find out generation after generation to living descendants who I contacted. Via my home page I also came in contact with Gun-Louise Johansson and Folke Larsson in Hallfose, Gotland, Sweden which definitely helped me to discover more descendants of the Dolson family. In 2010 my girlfriend and I went to Chicago to meet the Wahlborg family (descendants to Anna Dolson). While there we visit a number of street adresses where the former generations of relatives have lived, visited cemeteries where they rest and did some archive research at Chicago Museum.

I have written a book which includes what I have found, "The Jonson sisters in Chicago", April 2013.

The farmer Jonas Peter Larsson and his wife Inga Katarina Petersdotter had married in 1847 in the small village Skepperstad in the region of Småland in the southern part of Sweden. In 1850 the family moved to a farm in Stora Sälleryd in Vetlanda parish. They had five children; Christina born 1848, Anna 1849, Pehr Gustaf 1855, Carl 1858 and Hilma 1866. The sons became teachers and stayed in Sweden but all the sisters  emigrated to America; Christina and Anna in 1867 and Hilma in 1887.

Most likely they went by boat from Gothenburg to England, crossed England by train, went by boat from Liverpool to New York and finally took the the train to Chicago. The sisters settled in Swede Town, on the North Side of Chicago River. Before marriage they probably worked as maids. Christina and Anna soon got married. In Chicago the sisters rapidly became urbanized, the city expanded tremendously.  In 1871 they came to experience the world's largest fire diaster when almost the whole city burned down and the inhabitants had to flee.